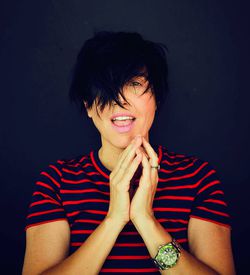 The Glasgow band, whose career has spanned more than three decades, are the first act to be unveiled for the 2020 HebCelt which will run from 15-18 July in Lewis and Harris.

It was confirmed today (5 December) they will top the bill on the Friday night on their first visit to HebCelt. More acts will be announced in the coming weeks.

Early bird tickets for the 2020 event have already sold out. From tomorrow (6 December) more tickets will be on sale on exclusively from HebCelt.

The band’s lead singer Sharleen Spiteri said: “We are thrilled to be making our Hebridean Celtic Festival debut in its 25th year.

“HebCelt is renowned as one of Europe’s leading summer festivals and we can’t wait to join in the celebrations for its special anniversary.”

HebCelt director Caroline Maclennan said: “Texas are Scottish rock royalty and a fantastic live band. We are thrilled to announce them as the headliners in what is a very special year for the festival.”

Texas were founded in 1986 by bassist Johnny McElhone, formerly of Altered Images and Hipsway, and Sharleen Spiteri, taking their name from the 1984 Wim Wenders movie Paris, Texas.

They made their performing debut in 1988 at Dundee University and the following year released their debut album ‘Southside’, along with the single ‘I Don't Want a Lover’ which became an international hit.

Texas' sales have topped 40 million records and they have had 13 UK top ten singles, three UK number one albums and eight UK top ten albums, including their ninth studio album, ‘Jump on Board’, released in 2017.

Their biggest selling album, ‘White on Blonde’, released in 1997, which spawned the massive hits ‘Halo’, ‘Black Eyed Boy’ and ‘Say What You Want’, was certified six-times platinum in the UK, a feat matched by their Greatest Hits album, issued in 2000.