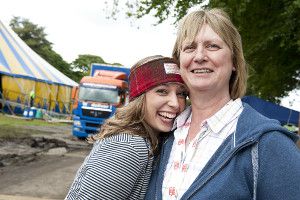 How did you get involved in the festival?It was an idea cooked up between Fiona Porteous and I in June 1995, and as neither of us knew the other well we felt we had to carry it through. Each of us knew others who could help make it work, so the team was built with the first festival held in 1996. We were such tremendous optimists but here we are over 20 years later still at the coalface and making it happen with an amazing bunch of people. I guess we still are optimists as, let's face it, who would do this unless they didn't always hold a half full glass?

What makes HebCelt special?That's easy, the people who help put it together, the festival family who have grown up (and old) with us and who have joined in the journey along the way. The location is superb too, Stornoway, the Outer Hebrides, the beaches, the hills, the culture, the community. It's pretty unique. The festival fits the place so well that everyone catches the buzz and gets involved in one way or another, even if it is just telling others how good it is.

Best festival memory?Hmmm, my memory is failing me now but we've had some great times at the festival and I've met some lovely people along the way. But it has to be a gig, or at least the infectious nature of it, Eddi Reader, 2011. Watching wee kids bouncing around to her singing Burns songs! Mad, but great too. Probably the only time during the festival when I've stayed rooted to the same spot for an entire 60 minutes.

Favourite festival gig?This has been difficult as there are so many. But Van Morrison, 2005 - momentous.