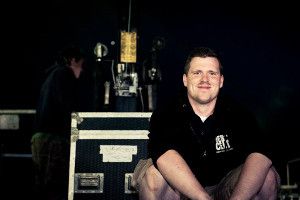 How did you get involved in the festival?: In 2007 I met a few folk during festival week - now good friends - who were volunteering. They told tales of hard work and good laughs to be had! Until that point I hadn't realised that volunteering at HebCelt was something you could do and their stories intrigued me. Having attended the festival for a few years, I wanted to get involved and give something back. I signed up for the Tech Crew in 2008 and haven't looked back!

What makes HebCelt special?: The place and the people. The Outer Hebrides, I believe, are the jewels in the crown of Scotland. The island comes to life during festival week and the locals welcome people from all over the world for what is a fantastic week of culture and music.

Best festival memory?: So far, my stand out memory came last year during Runrig's Saturday night set on the main stage. Standing backstage, looking out over the sea of festival-goers, hands in the air, singing the chorus line to Hearts of Olden Glory back to the band was incredible. Year after year that's what I take away from the festival. Hearing the roar of the crowd and seeing people having a great time, knowing that as a volunteer you've helped create those memories is pretty special.

Favourite festival gig?: There are almost too many to choose from but there is one stand out for me, Shooglenifty in 2002. It was my first time at HebCelt, having moved to Lewis the previous year at the age of 12. There was something mystifying about the way Angus Grant held the audience's attention, the way he moved, the tunes that flowed effortlessly from his fiddle. That was the performance that opened my eyes and indeed ears to Trad, Celtic and World music. I hadn't until that point realised that there was a world of Acidcroft, Techo Ceilidh and Trad Funk out there!