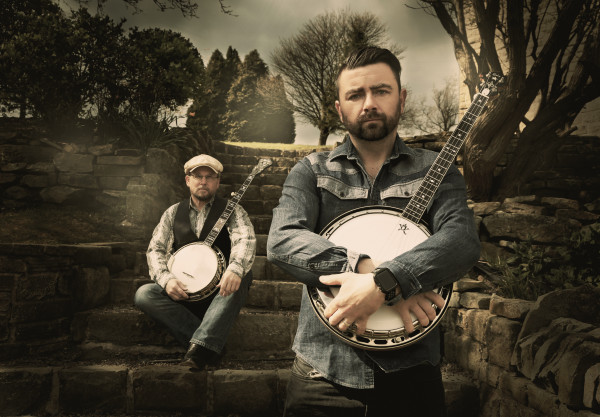 We’re all used to the colloquial phrase “Brother from another mother,” but when Ron Block’s wife Sandra met Damien’s Mum, Colette, she was moved to go one step further and exclaim, “No honey, they’re brothers from the SAME mother,” so alike did she find the two men in character. No wonder, then, that when Ron came to Rusby HQ to play on the album 20 in 2012, they found plenty in common, from playing the banjo, to a grounding in their own traditions of music, to the craic of enjoying a beverage or three in each other’s fine company.

They eventually made Banjophony and released it in 2018. It began as a single track, recorded in 2014, and remained a one-track record until Ron came to the UK to tour with Sierra Hull in 2016. Ron and Sierra stayed at Pure Studios during the Underneath The Stars Festival, enabling them to create five tracks from scratch and record them live during two highly productive days. It gave them the core of songs and the momentum they needed to finish off what became a “joyous” experience and a “bucket list thing” for both men when they met in early 2018 to complete the masterpiece.

Damien and Ron started working on a new record in April 2019 and had planned to finish it in April 2020 but a certain pandemic got in the way! They will release their new record in June 2022. A real treat for banjo lovers worldwid showcasing another masterclass on tenor and bluegrass banjos and how their respective traditions meet and unite in perfect and thrilling harmony.