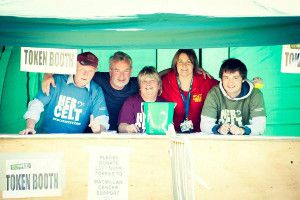 Festival role: I have had a number of various roles over the years, starting with stewarding, organising children's workshops in the Town Hall, Meet and greet/gate sales, team leader for Token stalls and Box office onsite and now team leader for Retailing with Breezy

How did you get involved in the festival?: We were lucky enough to get tickets at the second festival due to hubby doing site prep at the green, we enjoyed it so much we ended up stewarding! That was 22 years ago, hard to believe!

What makes HebCelt special?: Oh Gosh! So many things! It starts from the top, with great organisation and support from the Director downwards, add to that my favourite place on the Island (the beautiful castle green and grounds, looking out to Stornoway Harbour) the fantastic community spirit and the amazing volunteers, who have become so much more than that in our lives, sprinkled with a fine mix of music, drinks and food and you have got a pretty good recipe! Its also been a lovely time over the years to share with family and friends.

Best festival memory?: So many! Three top ones would be standing at the inner harbour with Canadian and American visitors, watching the dolphins dancing gracefully to the sound of Afro Celt Sound System. Dancing and singing the small hours away with Shooglenifty and sitting on the castle green drinking champagne and strawberries, listening to the sounds and toasting my Canadian cousins, home for a special birthday. Finally sitting back stage (after a hectic shift) and watching Runrig play their last Local gig, with the band watching on as the crowd sang away...magic!

Favourite festival gig?: Its so difficult to choose one but probably Van Morrison, though I really enjoyed red Hot Chilli Pipers at the festival Club!