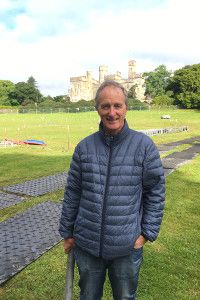 What is your role? The Grandfather

How did you get involved in the festival? I dropped in for a coffee and a chat with Caroline and Fiona at their work one day in 1995 and agreed with them it would be a good idea. The rest is history.

What makes HebCelt special? I've asked myself that question a few times, but I'm never able to answer it completely because my answer changes during the highs and lows throughout the year. I suppose it's being part of creating an event experience like HebCelt in such an amazing place, and feeling the tangible energy it generates in the community each year is what feels special.Â

Best festival memory? There have been several special moments over the years. One of the earliest was hearing the haunting sounds of Davy Spillane at the first ever HebCelt in a very small tent, and knowing from that moment that HebCelt was going to be something special. Another, was being able to experience the performance of the late Martyn Bennett, a truly gifted musician. I've also seen the emergence of gifted local talent who now feature in our programmes playing alongside internationally renowned musicians, and that is great to see as it is one of the key aims of the festival.

Favourite festival gig? That's a hard one to choose, because there's been so many fantastic bands who have played HebCelt. But amongst my top list, in no particular order, I would include Imelda May, Fred Morrison, The Chair, Van Morrison, Waterboys, La Bottine Souriante, Darrel Scott & Danny Thomson ...... and the list goes on. They all bring their own special sound which is why in my view every night has something unique.Â Like so many others, I think the final night performance of Runrig in 2016 was simply sensational. The warmth of the vibe in the tent that night was palpable, especially when the audience took over the singing while Runrig looked on from the stage with a smile.Â