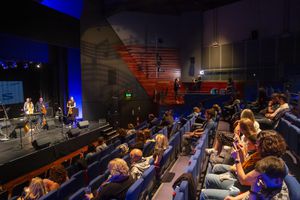 Orkney legends Saltfishforty will be live and streamed online from the Stornoway arts centre, An Lanntair. Saltfishforty is a dynamic duo hailing from the Orkney Islands. Douglas Montgomery (fiddle/viola) and Brian Cromarty (songs/guitar/mandola) combine the rich traditional music of Orkney with original compositions. The duo has five albums to their name and a host of awards.

Na Bailtean (the Villages) features a wealth of Gaelic and musical talent. Isobel Ann Martin, a Traditional Gaelic singer from the village of Tong on the Isle of Lewis; Amy Mackay was immersed in Gaelic music and culture and was brought up in Northton in South Harris; Norrie "Tago" MacIver is a singer/songwriter from Carloway on the west side of Lewis; and Ceitlin Lilidh who is a graduate of the Royal Conservatoire of Scotland and winner of the Traditional Gold Medal at the Royal National Mòd, are all performing in a unique pre-record featuring Gaelic song from areas across Lewis and Harris.

Also appearing live will be Staran, a collective of musical minds that traverses a diverse range of styles and backgrounds. While their overall sound is rooted in Scottish traditional music, there are undoubtedly elements of inspiration from the genres of jazz, minimalism and experimental electronica.

Graham MacCallum, HebCelt Depute Festival Director, said: “It was incredible to get the Survival Sessions underway and we’ve had tremendous feedback. People realise how much they miss live music and we’re so glad to be back, albeit in this limited event.

“Tonight’s show promises to be every bit as enjoyable as other festival performances we’ve seen. Our programme has underlined how important our Gaelic culture is to us and how so much musical talent has grown here in the Outer Hebrides. We are sure those tuning in will have something to savour.”

Survival Sessions can be watched on the MyPlayer platform. Details and tickets can be found here.

Survival Sessions performers can be heard talking about their shows in a series of HebCelt podcasts.