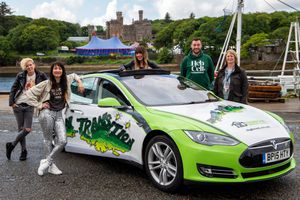 Festival headliner KT and band members Cat Myers and Mandy Clarke were driven to the festival site in a Tesla vehicle which is being used by Tighean Innse Gall (TIG), the housing and energy agency for the Outer Hebrides, to help raise awareness of climate change issues.

KT is a strong supporter of environmental issues and welcomed the opportunity to support HebCelt’s pioneering actions which include banning single-use plastic bottles and straws, the use of biodegradable plates and cutlery, tickets made from recycled plastic and having 80 per cent of waste diverted from landfill.

TIG have a presence at the festival to provide advice to thousands of people attending the event.

“With the help of TIG this year, they are helping to bring important issues to the attention of thousands of people which can only help in the fight against climate change.”

HebCelt director Caroline Maclennan said: “We are passionate about the need to protect our wonderful and unique environment and have been ahead of the game in many respects.

“The support from KT for our actions and the partnership with TIG will help get the message out to many more people.”

HebCelt opened on Wednesday and runs until Saturday. It features more than 30 acts including KT Tunstall, The Shires and Tide Lines, in events across Lewis and Harris.